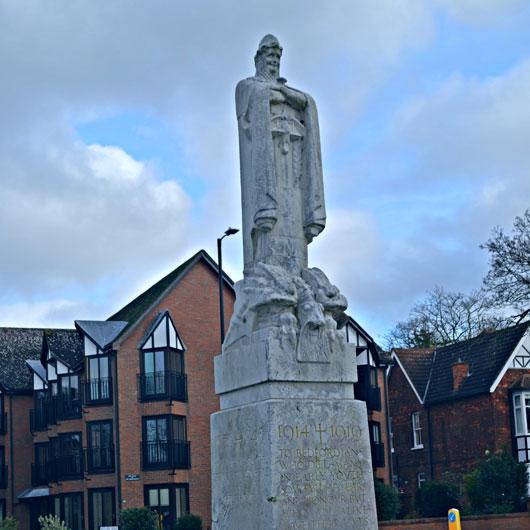 "The Talking Statues are a fantastic idea! They are a great way to learn bite-size local history in an interactive way. It’s a pleasure to be part of the initiative and I had a lot of fun providing the voice for the Jagger statue in Bedford.”

The Bedford War Memorial was unveiled on 20 July 1922 to commemorate those men of the town who had lost their lives in the First World War. The tall, semi-abstract figure of a warrior stands looking out over the river Ouse, standing upon a dragon representing evil conquered.

The statue was created by Charles Sargeant Jagger, one of Britain's greatest sculptors of Great War memorials, whose work includes the Great Western at Paddington and the Royal Artillery at Hyde Park Corner. In the sculpture's final stages, Jagger decided to make the figure female, cutting long plaits either side of the scales and the dove, and rounding the warrior's features.

This war memorial has no names. In 1922, the work to collate the details of all the dead of Bedford had not yet begun. Following the Second World War and the 1950-53 Korean War, further inscriptions were added to commemorate those lost.