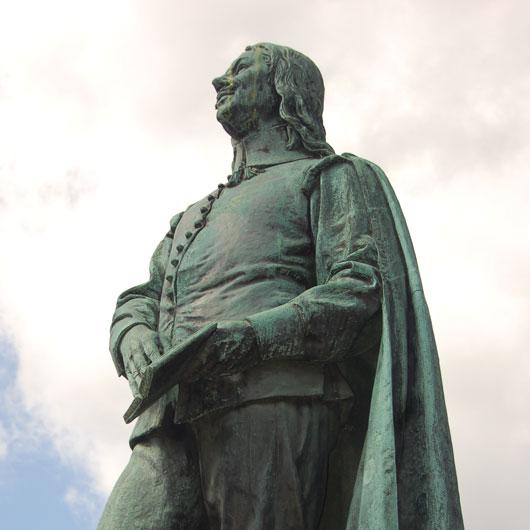 "Being born in Bedford, the John Bunyan statue was an integral part of growing up. I like the fact that he went to prison and wrote a bestseller while he was there. So if you should go to prison, why not write a book - you might get your own statue!”

John Bunyan (1628-1688) is best-known for writing the Christian allegory The Pilgrim's Progress. Following the journey of its hero, Pilgrim, from the City of Destruction (the world) to the Celestial City (Heaven), his book has been a bestseller ever since its 1678 publication - and has outsold every book in publishing history bar the Bible!

A tinker's son who had fought as a teenage soldier with the Parliamentarians during the Civil War, Bunyan became a nonconformist preacher during the comparative religious tolerance of Cromwell's England. However, following the Restoration of Charles II, he was imprisoned for 12 years in Bedford County Gaol on Silver Street for holding religious gatherings outside the parish church. As the mood of the country gradually became more tolerant, Bunyan was released in 1672 alongside thousands of other nonconformist prisoners.

Bunyan began to write The Pilgrim's Progress while in prison, publishing the book after his release. Its simple, clear style and Protestant message made it extremely popular in Bunyan's lifetime. It has since been translated into over 200 languages, and has never been out of print.

The bronze statue of Bunyan was created in 1874 by the eminent Viennese-born sculptor Sir Joseph Edgar Boehm, who is perhaps most famous for replicating Queen Victoria's face on the Golden Jubilee coinage of 1887. The statue's site on St Peter's Green was chosen by Boehm for its symbolism as a crossroads.